While its roots can be found in ancient Greek and Roman times, the origins of Mother’s Day as it’s known today in the U.S. date back to the late 19th and early 20th centuries and stemmed from some pretty dark times, according to History. Here are five surprising truths that you may not know about the holiday.

And despite it’s Dark Beginnings it’s now a time to honor our Mothers and those that have filled in as Mothers when ours were absent or chose to be absent.  My dedication goes out to all my friends and family: Specifically:

And remember you don’t have to biologically mother a child to be a great Mother.  Adoptive  Mothers are held in the highest regard as well.  and…….

All those people with FURBABIES you are honored and appreciated for your great LOVE,PATIENCE,and care that you give animals.  I truly admire those who do rescue work, that is the most heart wrenching job, but you do it and the animals that survive turn out to be the most loving, trusting animals, despite the paradox that might seem.

My two guys and one girl who I’m a MOTHER too are: DOUGLAS BREGG II who I adore and am soooo proud of while he might be 33 (or will be), He will always be like my young son only in better hands now (LYNN) 🙂   My other two are Ringo and Ms. Kitty the two that keep me the busiest , you know with spoiling them, letting them manipulate you, feeling guilt all out of the premise of LOVE 🙂 🙂 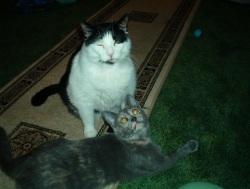 ON WITH THE ARTICLE

1.  Mother’s Day probably started as a way for mourning women to honor fallen soldiers.“Mother’s Friendship Day” was organized in 1868 to allow mothers of Union and Confederate soldiers to get together.

2. The earliest iterations of Mother’s Day in the U.S. were organized for several reasons, but celebrating mothers wasn’t among them. U.S. women’s groups in the late 1800s came together in West Virginia to tackle everything from infant mortality to disease and milk contamination. In 1870, a composer by the name of Julia Ward Howe issued a “Mother’s Day Proclamation,” urging women to become politically active and to promote peace following the U.S. Civil War, according to National Geographic.

3. The official holiday’s founder Anna Jarvis boycotted the holiday. Jarvis, a native of West Virginia, organized the first Mother’s Day celebration at a church in Grafton, West Virginia, in 1908 in memory of her own mother, who died three years earlier. She successfully campaigned to have the day adopted nationally, but by the time of her death in 1948, Jarvis had spent most of her personal wealth fighting the holiday she helped conceive. She apparently found the commercialization of Mother’s Day deplorable and sued groups that used the name “Mother’s Day” name to promote consumerism. She even lobbied the government to remove it from the U.S.’ official calendar.

4. Jarvis never married and was childless. In many ways, Jarvis’ unwavering devotion to preserving what she thought was the true origin of the holiday was more about her ego than anything else. “Everything she signed was Anna Jarvis, Founder of Mother’s Day. It was who she was,” historian Katharine Antolini, author of “Memorializing Motherhood: Anna Jarvis and the Struggle for Control of Mother’s Day,” told National Geographic.

5. The carnation was the original Mother’s Day flower. Some groups sold carnations every year to fundraise for their causes, something Jarvis vehemently opposed.

The following was posted on Micki Peluso’s blog.  I found it so interesting and informative I had to post it for all of you that are following me.

Micki has written a book about her daughter being killed by a drunk driver and I strongly urge you to buy it or read it on Kindle, and then kindly leave her a good review.  She is a great writer and FRIEND.

The Merry Month of May

May Day is usually, but not always, celebrated on the first of May, although in recent years enthusiasm for the holiday has waned considerably. Many Staten Islanders in New York can recall festivities in the past several decades which included springtime sports, and May Poles decorated with bright ribbons streaming from the top of the pole. Young children were traditionally garbed the ribbons and danced around the pole, reveling in the warmth of spring. Older girls crowned a May Queen, and young girls often made baskets which they filled with flowers and hung on the doors of their friends. Many parts of the country still participate in these activities although my borough of Staten Island does not seem to be among them.

The month of May has always been a favorite month, with spring in full bloom and summer close behind. On the original Roman calendar, May was the third month of the year but the revised calendar moved it to the fifth month. The origin of the name, researchers say, most likely comes from Maia, a mother of Mercury. In Roman times and throughout history May has been considered an unlucky month for marriages, stemming back to the days when both the festival of the dead and the festival of the goddess of chastity were celebrated in May. This may explain the popularity of June weddings.

Vassar College in Poughkeepsie, New York, has held May Day celebrations with field sports, dancing around the May Poll and crowning a May Queen with a headdress of fresh flowers. On some occasions college records in sports were broken on that day, possibly due to the enthusiasm for the holiday. The California State Norma School in San José originated May Day festivities in 1902, with games for their kindergarten students. By 1910, the popularity of this holiday had grown to such proportion that 6000 spectators gathered to watch the celebration.

These observances have little to do with the ritualistic and symbolic fetes of olden days. Historians of folk customs have traced the May Day ritual back to the Floralia of the Romans, the festival of Flora, goddess of flowers. This festival was instituted in 238 BC and was celebrated from April 23 until May 3rd.

During the four or five centuries that Rome occupied Britain, the May Day Festival was introduced and flourished. One theory states that the May Day was initially a phallic festival in India and Egypt, marking the renewal of the fertility of nature at springtime. Researchers claim that the Romans considered the May Poll to be a phallic symbol, and their merrymaking included quite a few licentious acts which were the focus of May Day celebrations in England for some time.

The Morris Dance was a pagan dance which consisted of male dancers in fantastic costumes dancing about the May Poll. The name Morris, a word of Moorish origin, is associated with mummers, who acted out the ritual of the pagan god who celebrated his revival after death. Another custom was the May Day procession of a Man-horse, in Cornwall, where the central figure, “Oss Oss”, was a witch doctor disguised as a horse and wearing a mask. Dancers acted as attendants, sang May Day songs and beat on drums.

These activities greatly offended the Puritans, who coerced the Parliament of 1644 to ban the erection of May Polls. The Restoration repealed the prohibition, and in 1661, to celebrate the revival of the old custom, a May Poll, 134 feet high was raised. Sir Isaac Newton purchased the pole in 1717 and used it as a support for his telescope in Essex.

The New England Puritans also voiced objections to May Day festivities, which incited Gov. Endicott of Massachusetts in 1660, to lead a group of men to Merrymont, where the dreaded May Poll had been erected. The men chopped the pole down and named the place Mount Dragon, after the Idol of the Philistines that fell before the Ark.

May Day was said to have magical rites, such as those of Halloween. Samuel Pepys, the English diarist, related how his wife went to the country each May Day to wash her face in dew, a magic ritual ensuring a good complexion. Poetess Ann May Lawler, put the custom to verse: “Ever on the first of May did magic walk — the legends say. Maidens rose at early dawn to find a dew-en-sequinned lawn, and she who humbly bathed her face in dewdrops, in the magic place, she, they say, may never fear the curse of freckles for one year.”

When Labor Day was established in this country, the workers of Europe decided to hold a similar celebration, which they observed on May 1st. Due to lively labor politics, the date became better known for riots, bombings and burned cities. Radicals in the U.S. followed the European example and held demonstrations on May 1st. Later many U.S. cities, particularly New York City, demonstrated on May Day with parades of radical, labor, and other organizations, followed by mass meetings.

The beginning of May, whether celebrated with May Polls and flower festivals, or labor demonstrations, or no celebrations at all, introduces a month with few surprises. While March “comes in like a lion and goes out like a lamb,” and April teases with balmy weather one day and pseudo-winter the next, the month of May brings a stable promise of ever better days to come.