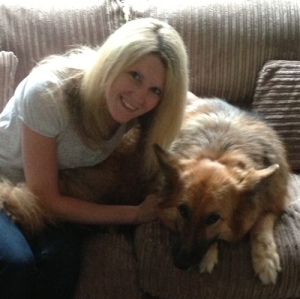 Lauren and her dog Kip

Hi, my name’s Lauren Algeo. I’m a 28 year old graphic designer from Kent, England. I currently write during my daily commute and spare time but would love to write for a living one day. I find writing a great way to unwind after a day at work and I get inspiration from everywhere. I always have a notepad in my bag for jotting down ideas. I live with my boyfriend and our dog, Kip, a German Shepherd we got from a rescue centre last year. For me, dog walking is a great opportunity to think through story ideas and new plots!

2.   What made you decide to write (the genre of your book), were there any influencing factors, or were any of the stories based on true events.

I’m a huge fan of horror stories and thrillers so they were natural genres for me. I’ve read a lot of Stephen King, Dean Koontz, Lee Child, Jo Nesbo and James Patterson so I credit them with my love of those genres.

3.    How do you promote your book, and do you find that difficult or just par for the course.

At the moment I mainly use social networking sites such as Facebook and Twitter for promotion, as well as Goodreads. It can be quite difficult to find time to fit in promotion as well as writing and the day job but it seems to be going ok so far. I’m learning all the time and always appreciate any promoting suggestions.

4.    Do you remember your first review and how it made you feel?  (If it was a bad one, also tell about your good one too).

My first review was a 5 star one on Amazon for my first book, Hikers – Part One: Power. It was really exciting to see it there and I love getting new reviews (good or bad), it’s always interesting to see people’s reactions to my books.

5.    Tell us about your book and if it’s a series and how the public is reacting to this book.

The first novel I published, Hikers – Part One: Power, is part of a horror series, the Hikers Trilogy. I’m currently editing Hikers – Part Two: Passion, which will be available to buy soon. So far the reaction has been great and I’ve had quite a few people contacting me to ask when Part Two will be out as they can’t wait to read it. I plan to start writing Part Three as soon as Part Two is published, and already have plenty of notes to get started with.

In between writing Hikers Part One and Two, I published a book called The Perfect Date. It’s a slight change of genre for me, more of a romance thriller, but there’s a plot twist that people have been very complimentary of so far – so not your average ‘romance’, more thriller!

6.    Can you share any and all links that are important to you as a person and the book?  (You can relate more to a book if you know more about the author).

For all the latest news on my books, go to:

To purchase ebook or paperback versions of Hikers – Part One: Power visit:

7.    I’ll wrap it up with this question since “7” is a lucky numberJ.   Can you share an excerpt from your book, and I’d like to thank you so much for taking time to share your book with me. Please share as much as you’d like.

Thanks for having me! I’d like to share an excerpt from Hikers – Part One: Power. It’s a horror thriller about an ex-Detective Inspector, Scott Brewer, who hunts hikers, a family of hired assassins with the power of mind control. Brewer is joined on his mission by Georgie Duncan, a moody teenager with a turbulent past, and together they must find a way to kill the seemingly invincible hikers. This excerpt is from the very start of the trilogy. I hope you enjoy it! 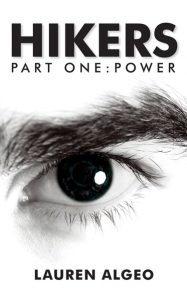 ‘It’s time.’ The voice in his mind urged.

He felt a moment of doubt but couldn’t think of a rational reason why. He had been planning this for days. He was ready. They would all pay.

He slipped his right hand into the pocket of the large duffel coat he was wearing and felt the weight of the gun. He closed his hand around the cool metal and rested his finger on the trigger.

He stepped onto the escalator and surveyed the scene as it descended slowly in to Waterloo’s main train station. It was lunchtime and people were bustling to and fro in front of him. Not as busy as rush hour in the morning or evening but busy enough for him to blend in to the crowd.

He felt a shiver surge through his body and he pulled the heavy black coat tighter around himself. The weather had begun to turn and he knew there were cold days ahead.

‘There! There!’ The voice whispered excitedly.

He looked towards a small crowd gathered round some video equipment near the middle of the station. A TV actor was filming part of a drama series there today. The man could see him sitting in a chair to the side of the equipment, being fussed over by a makeup artist. He felt a tug of anger as he focussed on the man’s smug face.

That should have been his life. He deserved fame, money and recognition. Instead he had nothing.

He walked towards the set slowly, not wanting to draw too much attention to himself. He set his face in a mildly curious expression, as if he was just heading over to check out what was being filmed. A couple of others were doing the same but this was London and most people weren’t too bothered about minor celebrities when they had their own important lives.

The TV star was talking to a young woman who had just had her picture taken with him. She was giggling and toying coyly with her hair. Women just threw themselves at celebrities. He felt that ripple of rage again. He was only a few steps away now.

The actor half turned towards him as he reached them, a friendly smile on his face. He assumed the man was just another fan coming to say hello.

The man began to pull his hand out of his coat pocket. It looked as though he wanted to shake hands and the actor started to extend his own towards the man. Their eyes met for an instant and he felt that moment’s hesitation again.

Before he could comprehend it, his right hand was being thrust upwards and his thumb clicked off the safety.

‘Now!’ The voice in his head screamed.

The TV actor barely had time to register the change in intent before the man shot him in the chest.

The sound was deafening and echoed around the station but the man barely noticed, all he seemed to hear was an insane laughing in his mind.

He turned swiftly and shot the young woman before the actor’s body had even hit the ground. His shot was wide of target and only clipped her left arm but he didn’t care.

He twisted and turned, firing at anyone in his line of sight. He spun to the right suddenly and felt the gun being guided to a middle-aged man who had been walking past.

The man was frozen to the spot, his eyes wide with shock and a sandwich dangling in his stiff fingers. He had on a dark pinstripe suit and was carrying a brief case by his side.

The man thought he heard the voice whisper through its chilling laughter. ‘Bang.’

This time his shot was perfect and he hit the man dead centre in the chest. His finger carried on squeezing and the gun bucked in his hand as he found running targets. There was panic everywhere but the urgency that had consumed him seemed to be subsiding. The gun clicked empty and suddenly the crazy laughter that had filled his mind was gone.

The world seemed to swim back to the man slowly. He looked around confused. People were fleeing away from where he stood and there were several others lying on the floor. He could see blood pooled around some of the motionless ones. Others were writhing around, trying to drag themselves to the safety of cover.

He looked down at the gun in his hand, realising what he had done. Now all he could hear was screaming.

***Lauren is a friend and colleague of mine with a wonderful book to share!  Make sure to check out her links as well.